8 Best Mountains in Patagonia You can Visit 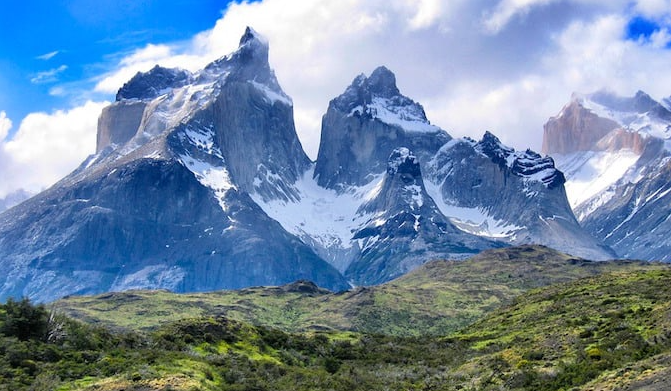 These are the Most Spectacular Mountains in Patagonia

Glacier Marshall is a short distance from the city after hiking trails and various difficulties. A walk will refresh you. The glacier is located behind the city and serves as a natural destination in the surrounding area. The most common route for visitors here is to cross the gorge and reach the top of the hill. If you plan to travel there, you must carry some essentials, some warm clothes, food, etc.

There you will also find a chairlift, which allows you to get to the top of the mountain in just 15 minutes without the need for a trekking experience. This hill has a beautiful view of the valley and the sea from the top, don’t forget to bring your camera with you to capture this view. In this article, we will talk about many attractive mountains including Glacier Marshall.

Volcan Batea is also a very large hill. If you plan to climb the Volcan Batea Mahuida, you will see different volcanic views in the two countries and the view is breathtaking. For this, you have to walk to Crater Lake. This volcano is located on the border of Chile and Argentina with one side for each country. The view of eight volcanoes and many lakes below is very beautiful. In winter, volcanoes have a lot of ice and then skiing is a great way to do it. There is also a small ski resort in Argentina for you during the winter. You will enjoy traveling here.

Sendero Loma del Pliegue is a 17-kilometer trail walk to Tumbado. As the altitude increases, the trail becomes more difficult, but all this effort will allow you to enjoy the views of the beautiful mountains that harbor the Andean condors and the rare slipper orchids. you

Be sure to visit Sendero Loma del Pliegue Tumbado. It is one of the best mountains in Patagonia.

As we mentioned above, Patagonia is home to the northern and southern ice fields, where the Andes Mountains are found, it is located mainly towards Chile. Some branches of the Southern Ice Fields reach as far as Argentina. They are considered to be the second-largest continental ice field in the world after them, found in Antarctica.

Ventisquero Negro in San Carlos de Bariloche. It is also one of the highest mountains in Patagonia. Here too you will find very interesting views. You must visit here in life and see the beautiful masterpieces of nature.

Fitz Roy’s peaks are one of the most famous in Patagonia. Hundreds of climbers from all over the world come here every year to test their skills on one of the world’s most technically difficult climbs. The more experienced here, the more likely it is to reach the top. You can see the best view of your life here and it takes a hard day’s trek up the mountain to get it, or you can go camping in the surrounding area for a wild experience. Make sure you keep Fitz Roy on your schedule and visit at least once. You will enjoy this trip.

With a peak at an altitude of 3,127 meters above sea level, often wrapped in an ice cushion, Cerro Torre is a high and prominent, needle-like peak that can be seen rising towards the sky. Those who travel here on foot can see this magnificent view, which is higher than the vertical kilometers above.

Cerro Torre has uncontrolled winds, violent storms, sheer cliffs, and icy peaks which makes it considered very dangerous. But still, the climbers tried. On January 31, 1959, an Italian climber named Cesare Maestri announced that she would reach the summit of Austrian climber Tony Eger. However, they were swept away by an avalanche. As a result, all evidence of their success, including the camera, will be erased.

The climbers continued their efforts on the Cerro Tour until 1974, but an Italian team would eventually succeed in the climb.

Cerro San Valentín is the highest mountain in Patagonia with 4058 meters of altitude. It lies at the northern end of the North Patagonian Icefield. It’s part of the Lagoon San Rafael National Park and has notoriously poor weather. In conclusion, the duration of the trip will be around 2 or 3 weeks to ensure both safety and a great time.

Where are the Patagonia Mountains?

In the southern part of South America, Patagonia covers 260,000 square miles, spread over Argentina and Chile. The region is rich in dramatic mountain peaks and glaciers. The area is known for its unique wildlife.

How tall is the highest mountain in Patagonia?

What mountain is in the Patagonia logo?

How many mountains are in Patagonia?

Patagonia is an area of ​​about half the continent and about 800,000 km2. It is the southernmost part of South America, approximately south of Monte San Lorenzo (approximately 47 ° S), and covers the southern parts of Chile and Argentina.

Which mountains pass through Patagonia?

The Andes mountains Patagonia run along the length of Patagonia, which has many walls.

Who ask you to climb From Bariloche in Argentina to El Chilton and Torres del Penn in Chile to Kohik, the Patagonian Andes is a treasure trove for climbers for peace and adventure.

Is Patagonia a mountain range?

Yes, Patagonia is home to the northern and southern icefields, located along the Andes Mountains. It is located in three regions known as Andean, Central, and Atlantic Patagonia. There are innumerable hills in Andean Patagonia. Because this is the place where the mighty Andean mountain range is located.

What is Patagonia famous for?

Patagonia’s worldwide popularity includes its landscapes, vast forests, natural resources, hotels, national parks, glaciers, restaurants, and local wildlife. Patagonia is a region with many provinces and all of them have different locations.

What is Argentina Patagonia?

Patagonia is a geographical region bordering the southern tip of South America, ruled by Argentina and Chile. It is bounded on the south by the Andes Mountains, on the west by lakes, fjords, and glaciers, and on the east by deserts, tablelands, and plains.